Ayurvedic treatment for diabetes in India:

Diabetes is a chronic disease and most people are always looking for safe yet effective treatment of diabetes without the adverse effects of allopathic medicines. Ayurveda is an ancient medicine practice that is very popular in India and emerging in Europe and United States as a complementary and alternative treatment for chronic illness like Diabetes. Patients with type 2 diabetes may inquire about current complementary and alternative therapies including Ayurveda for the treatment of their disease. Awareness of such traditional herbal modalities is necessary for effective patient counselling and care.

Type 2 diabetes is a chronic illness that has major long-term implications for individuals suffering from the disease as well as the health-care system as a whole. Modifications in diet, exercise, and lifestyle are all important factors in successful treatment of type 2 diabetes and are incorporated into the ancient Indian medicinal practice of Ayurveda.

Originating in ancient India, Ayurveda is a traditional medicinal practice. Translated from Sanskrit to mean “science of life,” Ayurveda connects physical (prakriti), spiritual (purusha), and physiologic processes to promote a healthy relationship between the mind, body, and soul.

The primary goal of Ayurveda is to maintain equilibrium between the 5 basic elements (Panchamahabhutas) of earth, water, fire, air, and ether or vacuum within oneself through the theory of the 3 life forces or doshas.

The doshas consist of vata, which correlates to ether and air, pitta, which represents fire, and kapha, which equates to the elements of earth and water.1 Vata, pitta, and kapha are the doshas of the body, while rajas, tamas, and satva are the doshas of the mind. According to Ayurveda, striking an equilibrium between the doshas corresponds to good health. Each living being has a tendency toward certain doshas structurally and physiologically, and such imbalances may lead to disease.

Ayurvedic practitioners make use of individualized diet, exercise, and lifestyle as well as procedural, medicinal, and herbal prescriptions in order to bring their patient’s doshas into optimal balance. Each patient comes into the clinic with different symptoms, diets, lifestyles, medical complications, support systems, and spiritual beliefs. Thus, the treatment plan is often tailored toward these individualized aspects surrounding a patient’s life in order to bring their doshas into a more perfect harmony

The primary medicines used in Ayurveda are derived from plants. Popularity of Ayurveda in the United States and Europe grew after Westerners became increasingly aware of the inability to cure certain chronic illnesses while recognizing the side effects of Western medications. Integrative medicine, which combines Eastern and Western practices, is on the rise with the hope of rebalancing health and wellness in Western population. Many case reports have shown the use of traditional medicine such as Ayurveda as being beneficial and even curative to a number of chronic illnesses including but not limited to arthritis, low back pain, hypertension, sciatica, migraine, neuropathy, parkinsonism, thyroid imbalances, liver disease, dysmenorrhea, polycystic ovarian syndrome, irritable bowel syndrome, asthma, allergies, eczema, depression, anxiety, and many others.

The use of Ayurveda in type 2 diabetes, a chronic, yet treatable disease, has shown marked improvement on patient outcomes in numerous case reports. Type 2 diabetes involves a lack of sensitivity to insulin and the subsequent inability of the body to regulate blood glucose levels. Type 2 diabetes is the most common form of diabetes in the India and primarily results from unhealthy lifestyle choices. According to the American Diabetes Association, when possible, type 2 diabetes should be treated with exercise, diet, and lifestyle modifications. However, progression to oral hypoglycemic agents and insulin will likely be necessary at some point during the course of a patient’s disease process as their pancreas is unable to keep up with amount of insulin necessary to compensate for the body’s resistance to insulin. Risk factors for type 2 diabetes are widely known and include being overweight or obese, family history of diabetes, lack of physical activity, poor diet, including excessive calorie consumption, low fiber intake, high consumption of saturated and trans fats, high glycemic load, high glycemic index, cigarette smoking, and alcohol consumption.

Overtime, high blood glucose has major complications, including damage to the heart, blood vessels, kidneys, eyes, peripheral nerves, digestive system, wound healing ability, and sexual response and leads to complications during pregnancy. A small reduction in hemoglobin A1c (HbA1c) of less than 1% has been shown to have a clear association with improved patient health outcomes. The ancient medicinal practice of Ayurveda, which is rooted in diet and lifestyle, is a promising traditional approach to the treatment of type 2 diabetes. Due to the large portion of the Indian population suffering from type 2 diabetes and the serious complications that result from the disease, health-care costs resulting from this illness are astronomical. Thus, the use of Ayurveda in treating type 2 diabetes should benefit more than just those who are suffering from diabetes.

Ayurvedic Treatment of Diabetes in India:

Udwartana is a powder massage often used for slimming and treatment of obesity that can be done daily.

Dhanyamladhara is often used in Ayurveda to combat obesity, inflammation, muscular pain, neuropathy, hemiplegia, and rheumatic complaints. It is derived from the word cereals (dhanya) and vinegar (amla). Dhanyamla involves preparation navara rice, horse gram, millet, citrus fruits, and dried ginger. During the treatment, the body is covered with this preparation and then by a heated cloth. The duration of the treatment is 45 to 50 minutes depending upon the condition of the patient.

Snehapana is a process of full body internal and external lubrication via drinking ghee and animal fat oil as well as massaging the oil on without any other oral intake.

Abhyanga is a warm oil massage. The oil is often premedicated with herbs for specific conditions.

Bashpasweda is a steam chamber in which the patient sits while steam emanates from a boiling herbal decoction.

Vamana (induced vomiting) is targeted to expel increased kapha dosha from the body.

Virechana is the second procedure in the sequence of Panchakarma (Ayurveda Detoxification Program) that involves using plant medicines that have a laxative effect, mainly aimed at reducing pitta dosha and toxic accumulation in the gastrointestinal tract, liver, and gallbladder.

Yogavasti is a type of medication given by enema, aiding in diminishing extra vata dosha present in the body. Vata is the force behind the elimination and retention of feces, urine, bile, and other excreta.

Shirodhara is a form of Ayurveda therapy that involves gently pouring liquids over the forehead and can be one of the steps involved in Panchakarma.

Traditional Indian medical herbs used for strengthening the body’s immune system are known to have many essential and nutritional elements. Their excess or deficiency may disturb normal biochemical functions of the body. Each herb used in Ayurveda has a different dominating or therapeutic elemental property. Mechanisms such as the stimulating or regenerating effect on beta cells or extrapancreatic effects are proposed for the hypoglycemic action of these ayurvedic herbs in treatment od diabetes and sugar metabolism. As such, depending on the symptoms presented by a patient, an Ayurvedic practitioner can select the appropriate treatment. For treatment of type 2 diabetes, the herbs M. charantia, Pterocarpus marsupium, and Trigonella foenum greacum have been proven most successful.

The top 10 plants used in Ayurvedic treatment of type 2 diabetes in India are:

Role of chromium in Ayurvedic management of diabetes in India:

Chromium has been shown to aid in the action of insulin, and some studies have demonstrated a chromium deficiency in diabetic patients Chromium is an element responsible for maintaining normal glucose metabolism and is found in the same area of the pancreas where insulin is produced. Plants and herbs contain elements which maintain glucose metabolism in similar fashion to the way in which insulin regulates blood glucose levels. As such, these natural resources have the ability to assist in treating type 2 diabetes. Babbul and seeds of Karranj beej are among the most beneficial in the treatment of diabetes. These 2 fruits have high levels of chromium in them.

Mode of action Ayurveda medications in treatment of Diabetes and sugar control (Pancreatic as well as Extrapancreatic effects):

-decreasing blood glucose synthesis through depression of the enzymes glucose-6-phosphatase, fructose-1, and 6-bisphosphatase,

Alternative and complementary medicines such as Ayurveda present many treatment options for chronic illnesses such as type 2 diabetes. With a strong focus on mind–body connection, nutrition, exercise, lifestyle modifications, and herbal use, Ayurveda has the power to truly make a large impact on patients suffering from diabetes as well as the health-care system. Often, chronic conditions are best treated with lifestyle modifications. Ayurveda seeks to eliminate the use of pharmaceutical agents by practicing a holistic approach to medicine and managing chronic conditions. The integration of Ayurveda system of medicine in diabetes management may be helpful for better control of sugar metabolism.

Glycoherb is a unique herbal formulation containing Berberine and Banaba which have proved most effective herbal and ayurvedic treatment for diabetes in India for helping sugar metabolism and maintaining blood glucose levels. 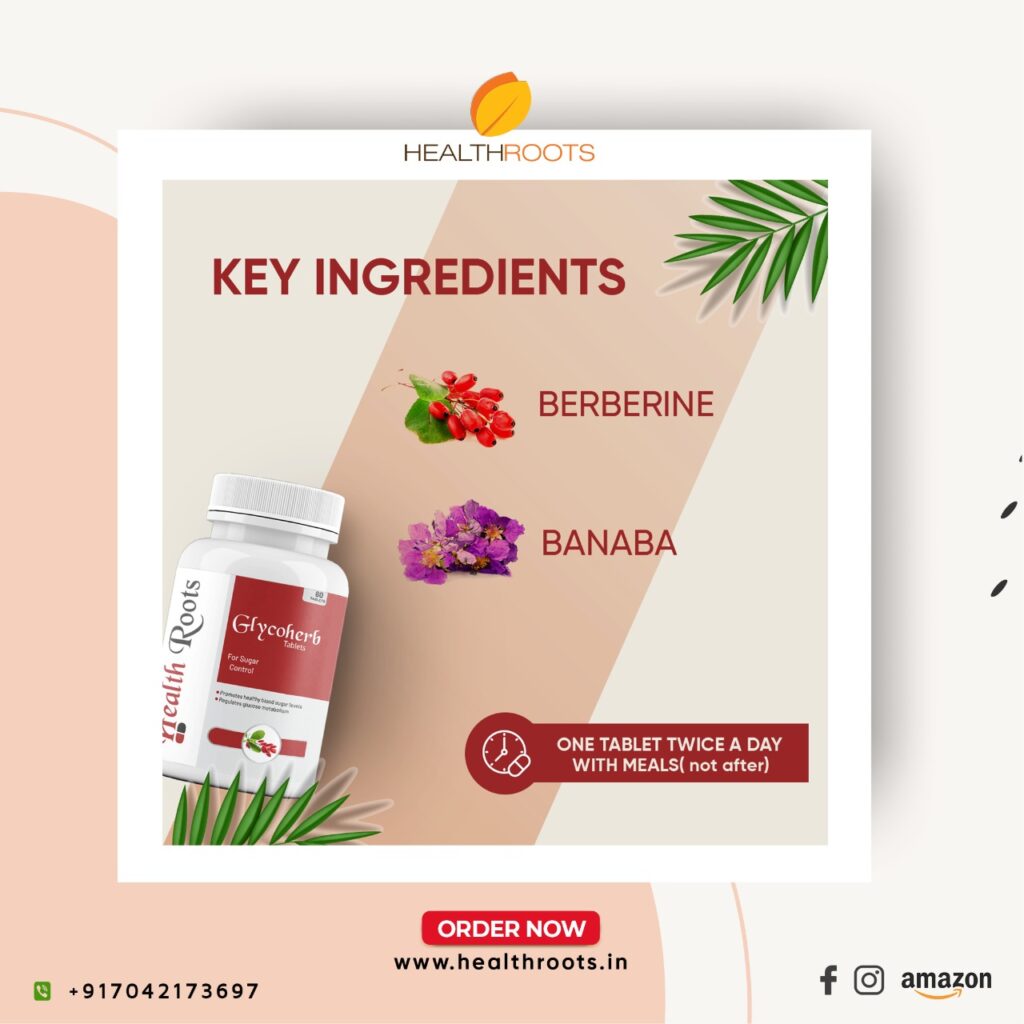 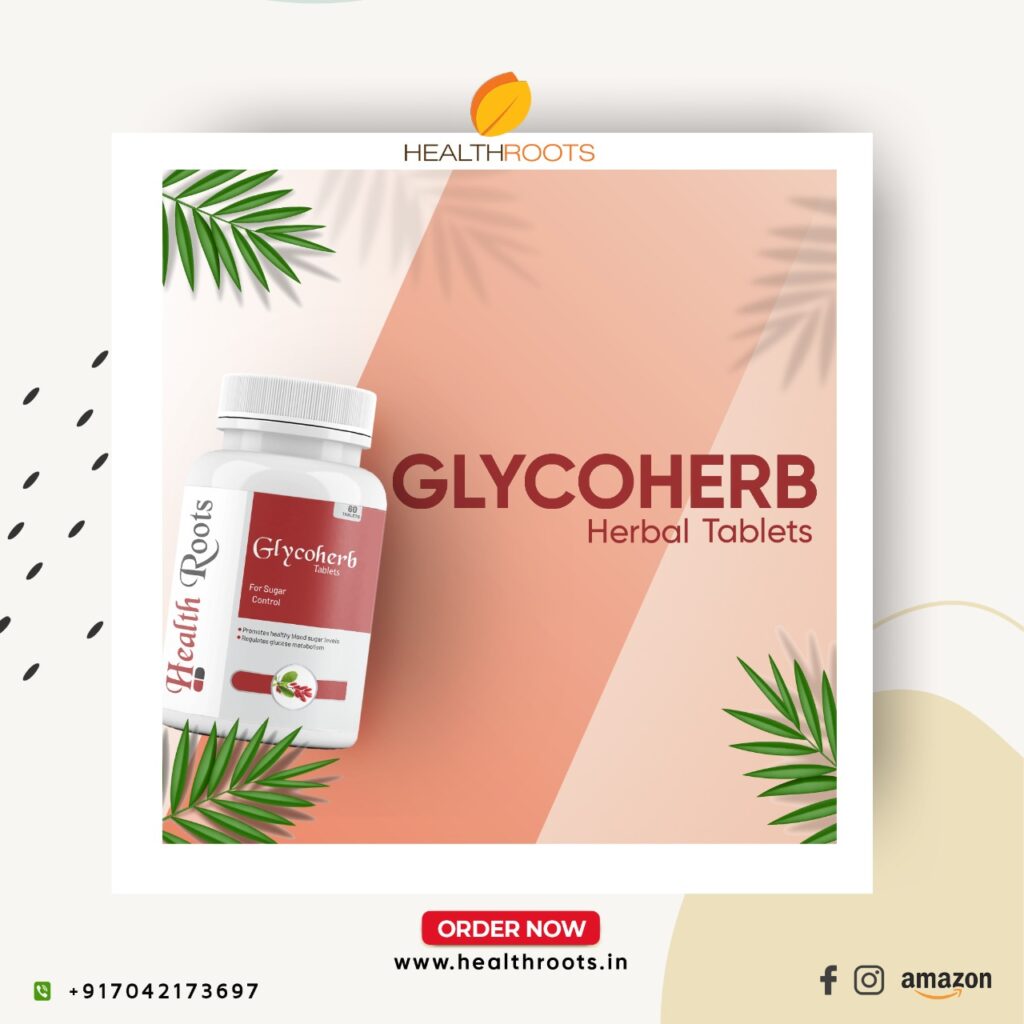 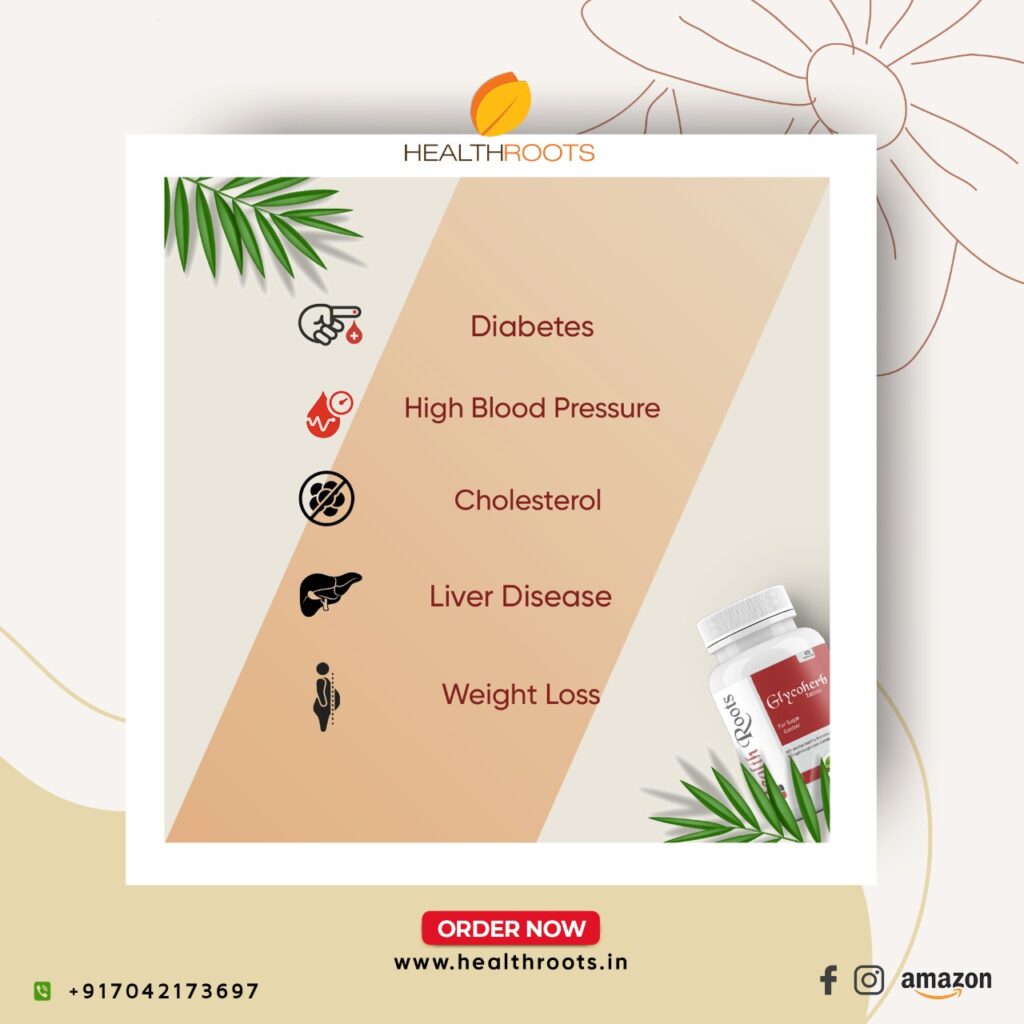 2 thoughts on “ayurvedic treatment for diabetes in India”